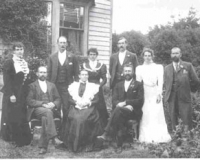 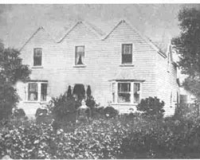 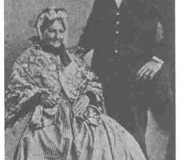 To the right of the porch as you look out on the graveyard at Christ Church Taita, tall camellia trees and climbing roses now shade a large grave with iron railings. Buried there are Robert and Henrietta Kemble, two of my great great grandparents, and their friends the Bucks and the Pikes.

When Robert Kemble’s ship the Adelaide arrived in the harbour on 7th March 1840, Petone was flooded. The 4 ships of immigrants that had already arrived in January and February had increased the population of Petone by about 600 Europeans. The arrival of more ships caused great celebrations but there was still nowhere for the new arrivals to live.

There were no houses, only temporary huts built with the help of the local Maori and some of the huts on the river bank had flooded. Others lived in tents or in the NZ Company immigration barracks. These were so rat infested that probably a hut with a raupo roof was a luxury.

Now, the Welch family had arrived in January 1840 as assisted immigrants on the Oriental – they were living in one of those dirt floored huts with water running through it, along with their 7 children between the ages of 8 months and 12 years. Another baby, Hannah, was born just 9 months after arriving here – sadly she didn’t survive but there were 3 more children born in the next few years to Ann & William Welch who did.

To speed the story up, in 1848 Robert Kemble and other young men from Wellington and the Hutt chartered a ship to California in search of gold but they failed to make their fortunes. Robert returned to England, married Henrietta Jones – from Wales – and brought her back here, joining his friend George Buck in partnership in his hotel the Travelers Rest, just down the road from this church.

The Taita Settlement
By 1853 there were over 30 households of new immigrant settlers in the Taita area, including the names Buck, Daysh, Harris, Hooper, Hirst, Kemble, Liverton, Mabey, Peck and Welch. The Bucks had stayed here and prospered. They had moved from Thorndon to Taita – in 1850 George Buck hired a school teacher for the local children, in 1852 the Travelers Rest Hotel was built opposite the Taita Hotel then the Christ Church building followed in 1853, the first service being on 1 January 1854. George later gave land for a school to be built, which I think must have been the Taita School, built in 1861 just down the road from the hotel and across the road from the Pikes home.

Meanwhile young William Read Welch, now 18 years old, also left in 1848 in search of gold, going to Australia for a couple of years. He returned with 500 pounds in his pocket and in 1856 he married Sarah Arabella Hedley in this church, when she was 20 and he was 25.

William and Sarah lived in a small cottage with his family, across the road (now the railway line) from the church. Their son George, the second of 9 children, was born in 1859. In 1870 they built a large 2 storied house, Laurel Hall, but until then things must have been very cramped.

Most of that large tribe of 10 Welch children, the first generation, grew up and married into other local families – the Wrigleys, Percys, Poads, Meagers, Keys, Harpers, Winteringhams, Harveys, Buckeridges, . . . . and most of them also had large families. Many are represented in the churchyard. The church would have been the focus for the social life of the community, the place for young people to meet, as well as a place for spiritual peace and comfort in difficult times.

The Wairarapa
By 1856 the track over the Rimutaka Range was suitable for bullock wagons, so families were moving to the Wairarapa to occupy land acquired by the Crown from the Maori and sold to new settlers.

Robert and Henrietta Kemble moved to the Wairarapa – first to Greytown, then to run the Gladstone Ferry Hotel, then to Carterton to run the Pioneer Hotel.
They also owned several parcels of farming land in South Wairarapa, some in partnership with George Buck.

Annie was born in Carterton in 1864. She was only 6 years old when her mother died from burns after her clothes caught fire early in the morning in the kitchen of the Pioneer Hotel. It was terrible – Robert heard her screams and tried to extinguish the flames with a blanket but she was too badly burnt. There was no medical help available and she died a few hours later.
Henrietta was brought back over the hill and her funeral took place from George Buck’s home in Taita. She was buried at Christ Church Taita in the large shared plot, next to George’s wife Mary Ann Seldon Buck who had died 4 years earlier.

Growing up in Wellington The 5 young Kemble children were brought up by their father with the help of his good friends, the Bucks and Pikes. George Buck was also a widower so the two friends were both solo fathers bringing up their children.

There is a lot more to the story, including the Kemble children all boarding at Porritt’s School in Wellington, then later the 2 Kemble girls keeping house in Mt Victoria for their teenage brothers who were at college and starting work. Times haven’t changed that much – their father had to come to town to put a stop to their extravagance and partying, then Annie’s older sister Fanny married a Mr Jagger against their father’s wishes and left for Melbourne.

In 1880 Robert Kemble died, aged 58, at the home of George Buck. His death certificate gave the cause as “softening of the brain and exhaustion”. He is buried at Christ Church, beside Henrietta.

George Buck became the guardian of the Kemble teenagers, and it was from his rather grand home ‘The Oaks’ that the 20 year old Annie married George Welch in 1885.
The Oaks was named for the trees that Robert Kemble had helped plant.

George Welch was a tall, athletic young farmer, a representative cricketer and rugby player, said to have a very pleasant personality and a fine singing voice. What more could the young Annie want? George was over 6 ft tall, Annie was very pretty and tiny, only as tall as his outstretched arm.

Times were certainly hard and mutual help was essential for survival, but there was plenty of shared fun when the farm work allowed. Families, neighbours and close friends were the core of the support network and there were a lot of social gatherings at the Welch family home, Laurel Hall, across the road from the church. A strong interlinked community had grown up around the church here and in the satellite region of the Wairarapa.

A walk through the graveyard will reveal a lot of very moving stories of both hardship and joy.

Lynn Austin was one of six children, raised in the Taita area in the late 40s, 50s & 60s. Her Dad (David) was a policeman. The youngest child Raymond was at the age of 8 when he died of a brain tumour. The family that felt his lost keenly, buried him in the Christ Church Cemetery.

Lynn’s parents, David & Jean O’Brien choose in due course to be buried beside him in the same plot.

This rather sad story had a happy ending, when Lynn’s daughter Natalie was married to Matt Lincoln in Christ Church in mid-October this year. The day was fine and the church was full. At time of going to press, Natalie was planning to lay her bridal posy on the grave of her grandparents and of little Raymond. So the Christ Church in Taita continues to bless the lives of those who pass though its gates. 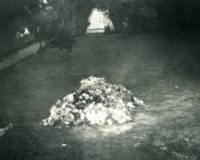 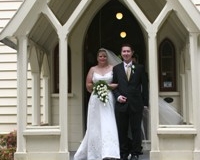 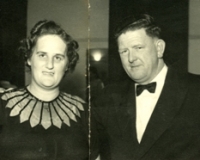 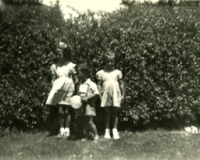